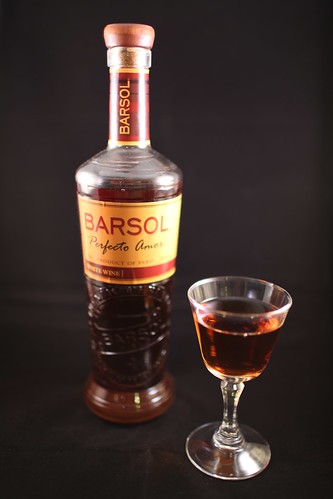 Barsol Perfecto Amor is a fun blend of both pisco and aperitif—pisco is added to the fermenting grapes. Sweet like a dessert wine and savory like a sherry, the aperitif wine pleasantly balanced the two.

According to the distributor, the spirit has some old ties. It's produced in Peru's Ica Valley, where pisco is famously made, and distilled in Peru, Bodega San Isidro, an old spot that dates back to the 1800s.

With sherry on the rise, we felt that Barsol Perfecto Amor offers a very accessible option for drinkers still getting used to fortified wines. At 17% alcohol, it's stronger than the majority of wines, but much gentler than a spirit or liqueur. It's bright like raisins but still a little nutty and not too sweet or syrupy. Every note is soft and round. It's easy to drink on its own or as part of a cocktail.

At many places you can find a bottle for under $20, too—which makes it really affordable, more so than most good sherries. It's a fun bottle to keep in the fridge as a sip for guests or a small glass before or after dinner.
Posted by Noelle at 2:10 AM

In any case, the vast majority like to reuse bottles as opposed to reusing it as reusing includes convoluted process though reusing is very simple. To reuse bottles, straightforward cleaning of the containers is adequate. Glass Bottles Manufacturer

I think this is an informative post and it is very useful and knowledgeable. therefore, I would like to thank you for the efforts you have made in writing this article piknu