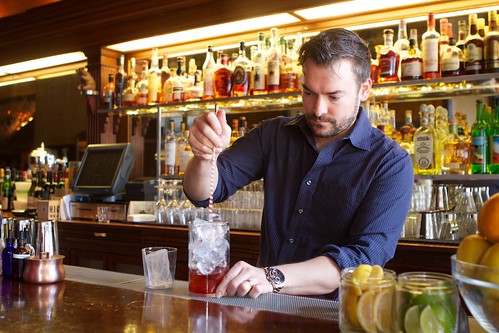 We thought we were sad when The Coachman closed this month. Not to mention that Trou Normand closed its early morning and espresso service. Well, we got a heavy dose of salt in the wounds when we learned that one of our other favorite bar programs, Tosca Cafe's, is being cut down. Star bar director Isaac Shumway is out, and the general manager and chef will now run the bar instead––with what we can only imagine to be a drastically simplified cocktail menu. Call us the Sorrow of Drinking.

Under Isaac, Tosca had one of our most favorite cocktail programs in the city. As a former cook, Isaac brought his experience from places like the French Laundry and Gary Danko to one of the most ambitious cocktail menus in San Francisco. He has one of the most perceptive palates and an unrelenting eye for technique and execution. Classics and originals alike were obsessively honed, perfecting cocktails down to the specific blends of sugars and level of citrus oil. The cocktails—no matter who made them—were executed to perfection. This is a big deal, especially in a city like San Francisco. It's hard to make a great menu. It's even harder to bring together a whole staff to execute consistently and quickly, even when the crowds press in.

We won't be surprised if there is an exodus of bar talent at Tosca following this news.

Cocktails in San Francisco have had a rough start to 2015. Let's hope it's only up from here.

UPDATE - 3/2
Thanks to an anonymous commenter who pointed out an article in SF Weekly. Paolo Lucchesi reports that Tosca has replaced Isaac with Joe Cleveland who will "take over lead bartender duties." Congrats to Joe! We are anxious to see what he does with the cherished program and spot.

You must like to wait twenty minutes for a drink. I like to drink when I go to a bar. Also, bars make money when the drinks are simple and can be made expediently. Hence the change.

Hi Chris! I have personally never had to wait 20 minutes for a drink at Tosca, but I can understand your point of view in response to these high quality drinks. There is a time and place for everything—for quick drinks and for slow drinks, for careful drinks and for casual ones. In my personal view, Tosca did an amazing job of catering to this high end without waits.

This post is full of inaccurate information. Yes, Isaac is no longer at Tosca as the bar manager, but there is already a new bar manager. Please fact check.

Anonymous–– to the best of our knowledge, we reported what happened. Last night, we reached out to management for a comment, but we have not yet heard back. We will, of course, update as we receive new information. If you have concrete and credible information, please share!

Josh, Did you reach out to management prior to posting this blog? Did you fact check? If so, please quote the source of reference in your blog. If not, then it could be irresponsible to write something that "appears" to be fact when it holds no validity.

One writer to another.

Hi, Anonymous - Thanks both for your interest and your eagle eyes for accuracy. We care about accuracy, too. We are relying on Isaac as a credible source, corroborated by others. We of course recognize that that there may be other perspectives, which is why we reached out to Tosca twice after posting. I will share any response, if they get back to us.

This said, the one, undeniable and key fact remains that Isaac Shumway is no longer employed at Tosca anymore. We discuss what we believe the impact will be and recount his contributions to the program there. There may well be another bar manager, but that would not be exclusive of anything we shared here. We would be happy to post about that bar manager, if or when we hear of it.

By the way, would love to know who you are, so we can interact with a real person and understand where your perspective is coming from. Inquiring minds want to know!

Hi again, Chris - By the way, I totally did not mean to invalidate your perspective. I'd love to hear about the places you like, too.

It's very great to see your post!I like it .I'm looking forward to you in the next

post.Thank you .There is a dell recovery software to you.

I like this blog! In return, I want to share some cheap ray ban sunglasses with you.

I am deeply attracted by your post. It is really a nice and informative one. I will recommend it to my friends.
Read more