After a quiet summer, the end of 2015 was a big season for bars in San Francisco. Where is everyone now? We often get emails about where regulars can find their favorite bartenders. So we decided to make it easier for everyone. We're putting together a regular list of where some of the most talented people behind the bar have been coming and going in the past three months.

Hear something or want to be included on the list? Drop us a line at hello@spiritlifestudios.com. We'll fact-check it and add it to the list.

Bear Vs Bull: A neighborhood bar, cocktail watering hole, and flick house all in one [PHOTOS] 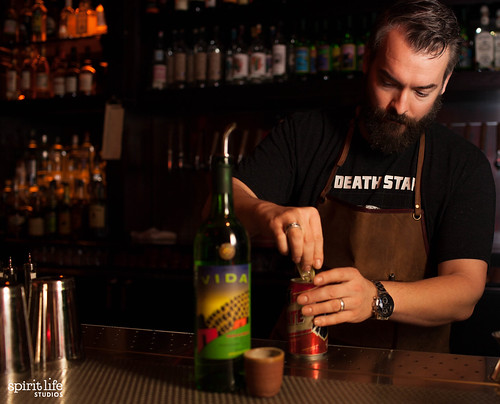 It is a truth universally acknowledged that in order to get a decent cocktail, you need to 1) recite a password to gain entry, 2) divine the meanings of a deeply poetic menu, 3) cower at a sassy bartender.

OK, so maybe we're being overly dramatic to make a point (pound sign handonforehead), but lucky for casual bar flies, more and more bars in San Francisco are on a trend to make cocktails less pretentious.

Bear Vs Bull, the bar inside the newly opened Alamo Drafthouse Cinema, is part of that movement.

Drink nerds have been anxiously awaiting the project's opening for months now. The team that originally built a following at Tosca has reunited for Bear Vs Bull. This time, though, they integrate the casual environment of a neighborhood dive with a spectrum of boozy treats: simple but carefully made cocktails, 30 beers (25 on tap), 18 boilermakers, and four frozen blended drinks. Spirits lovers will also rejoice in a wide selection of whisk(e)ys and agave bottles for decent prices. 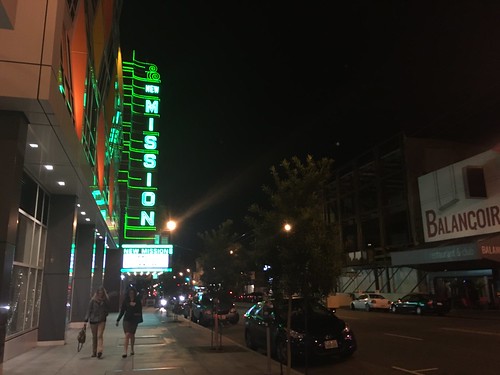 Does this mean that high prices and long waiting times are creeping into dive bars? Not here.

Bottles and cans of beers are available for as little as $2 to $3, boilermakers go for as little as $7, and even pinky-up spirits drinkers will find the menu rife with deals (yes, Hibiki 12 for $12 and Pappy van Winkle bourbon for as low as $35 a pour. Please don't tell anyone else).

Bartenders keep short wait times with quick­ fixes like cocktails on tap, straight­ forward cocktails, and a veteran staff––most of whom have worked in the trenches of high volume watering holes in the city. (Five deep? Pffffttt.) 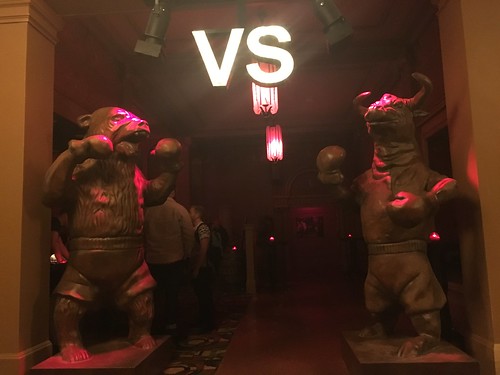 Leading the program is beverage director Isaac Shumway (formerly of Tosca, Heaven's Dog, Bourbon and Branch, French Laundry, and Gary Danko) who has built a reputation on his attention to detail.

Many cocktail bars try to loudly flaunt precision and forethought, but Isaac is trying to do the opposite with Bear Vs Bull. He seeks to make the experience so familiar that guests may not even notice the extensive work behind the scenes. 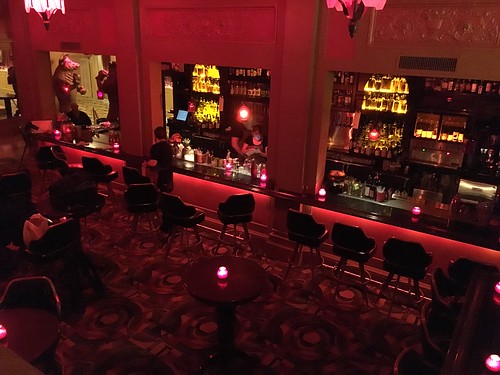 The space itself is wedged into a quiet corner of the Alamo Drafthouse, a chain known for comfy, text-and-talk-free movie theaters that allow you to eat and drink while you watch a flick.

Crowds ebb and flow with the show times, as movie goers can casually lounge and discuss plot twists. Between drinks, bartenders rotate a series of rock and roll records to keep the mood fresh. A smattering of tall tables and broad­ backed chairs allow guests to linger without feeling too cramped. 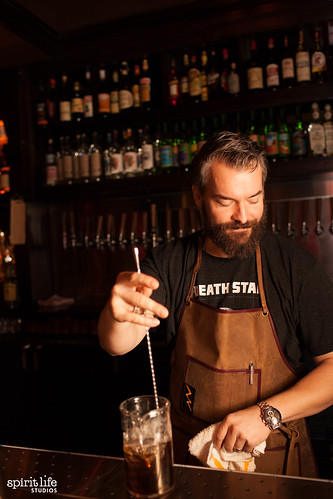 Behind the low key environment, Isaac and his team have sewn together a tightly knit theme that pays tribute to the theater's rich history, the neighborhood, and cocktail tradition.

The theater that Alamo now occupies is over 100­ years ­old, its first heyday in the wild 1920s. At that time, cocktail forefather Charles H Baker was abroad in South America where he was chronicling a drinking culture that would turn into his book A South American Gentleman's Guide to Drinking.

It just so happens that Bear Vs Bull is in the Mission District, a historically Latin community. So Isaac decided to pay tribute to the Alamo Drafthouse's history and its neighborhood by featuring Baker's drinks from his South American travels in the 20s, an often overlooked chapter of the writer's famous history.

In practice, this means honed Baker cocktails from his South American period.

Meet some of these cocktails:

This rich and herbaceous cocktail will make fans of Old Fashioneds and Fernet giddy. Christian Clark, formerly of Tosca, Big, and AQ, came up with the recipe for this cocktail, which Isaac says is the Remember the Maine variation that he himself has been unable to perfect for years. The original uses rye, sweet vermouth, cherry heering, and a bit of absinthe. 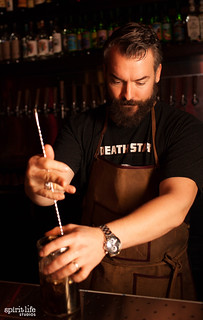 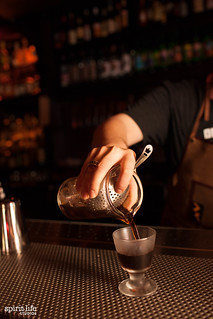 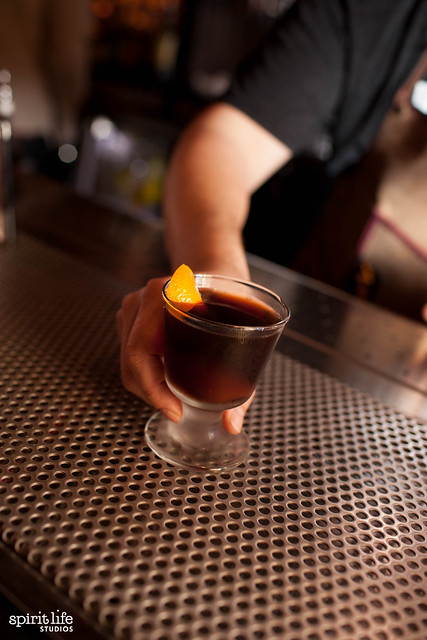 Do you ever ask a bartender how they like their own martini? This is Isaac's. Isaac creates a clean and fragrant version of this beloved classic by using Martin Miller's Westbourne Strength Gin.

You can find the martini on the menu in the Alamo Drafthouse theater or order it off-menu in Bear Vs Bull. Please note the classic martini glass––don't order this one unless you're sober enough to keep the drink from sloshing over the sides. ;-) 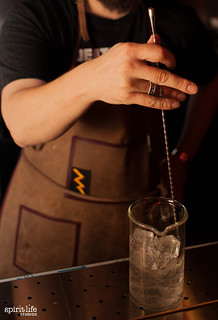 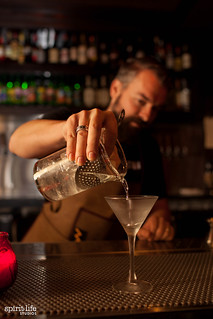 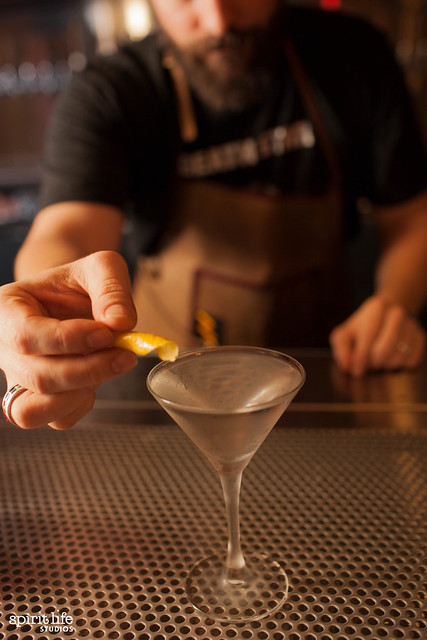 The ingredients sound strong, but the Waxman Special is an easy sipper, part juicy apple and part delicate bouquet. 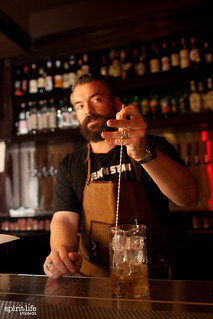 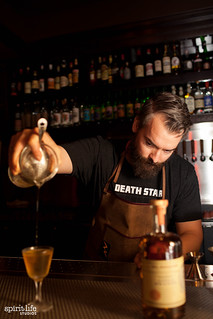 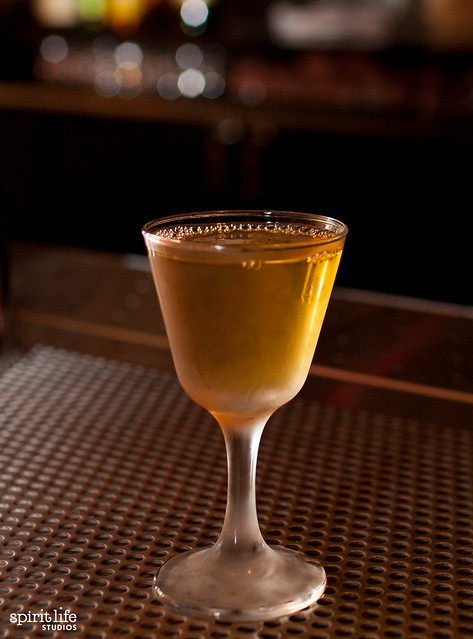 This refreshing cocktail sips a bit like a buttery Mint Julep. It combines calvados (French apple brandy), honey, coconut­-washed Cointreau (orange liqueur) and lime and is served in a custom­ made ceramic cup over cracked ice. 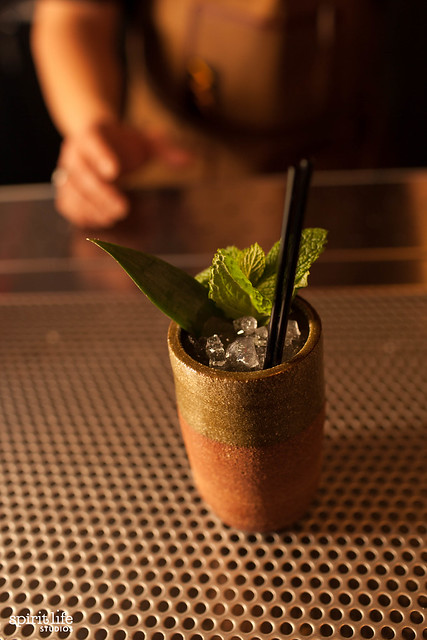 Bear Vs Bull features a three­-drink selection of cocktails on tap, which allows the staff to move quickly but also play with new textures for the cocktails. The original gimlet is made from gin and lime cordial, as beloved by drinkers as it is simple.

Isaac's version uses nitro to introduce tiny bubbles in the gimlet and serves it over a large, clear block of ice. The result is a creamy consistency. He also packs in a pleasant burst of citrus by making the lime cordial in house with fresh lime peels (did we mention he used to cook at The French Laundry?). 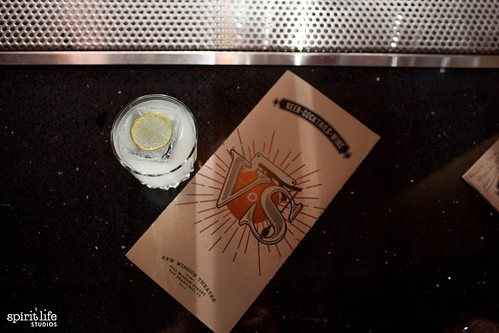 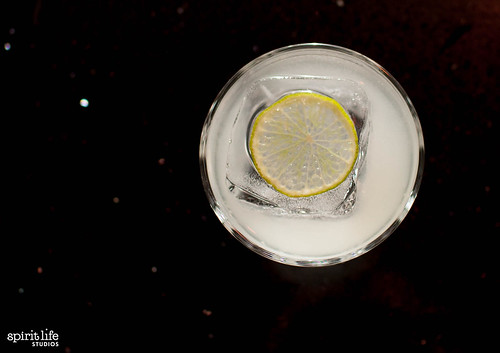 For years, cocktails know­-it-­alls­, er, I mean cocktail geeks, have looked down on frozen or blended cocktails because of bad memories from high-­fructose blended drinks, headache free of charge. That and who doesn't love a high horse, amirite?

Isaac, however, likes to point out that blended and frozen drinks are historical because you can find them in Charles H Baker's book (and we all know that to end cocktail argument among nerds, you simply need to establish some kind of historical precedent).

Bear Vs Bull highlights four frozen and blended drinks to the menu. Each drink is carefully measured to spec and the amount of ice is weighed on a scale so that it has the perfect ice ­to­ drink ratio. While you can't get the frozen drinks in the theaters, you can order them at Bear Vs Bull and bring the frozen drinks into the movie with you. 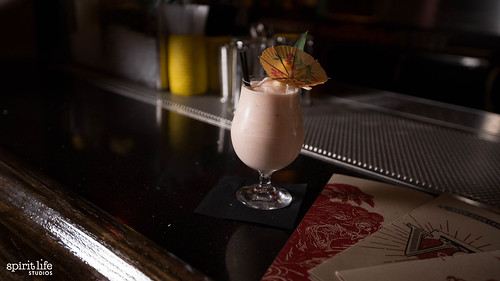 You can order cocktails, beers, and frozen drinks both at Bear Vs Bull and at the movie theater (see below for the full details, as there are some differences between the theater menu and Bear Vs Bull). Theater drinks are served restaurant­ kitchen style with a full roster of bartenders at three wells that crank out drinks. Bartenders first train in this kitchen before getting behind the bar at Bear Vs Bull.

One easter egg you can only get in the theater (and not at Bear Vs Bull) is the adult milkshake. At $14 or so, these shakes are actually a steal because you're getting the best ingredients––Dandelion Chocolate and Strauss Cream, for example––and they're ridiculously rich, creamy, and smooth. 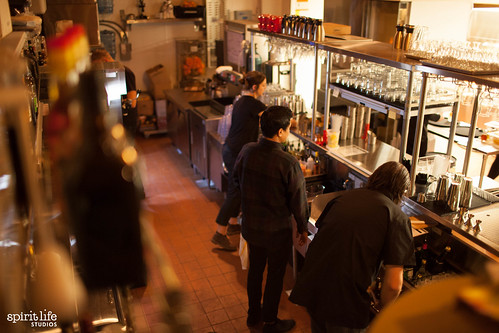 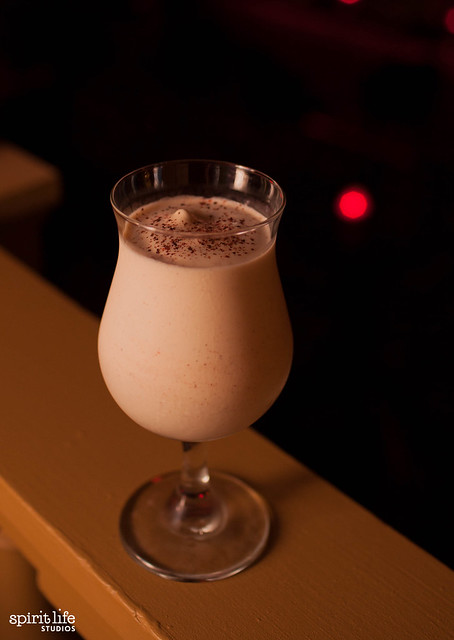 Like most cocktail bartenders, Isaac and the Bear Vs Bull team love beer. And they particularly love it with shots. Their beer list, though massive, is carefully cultivated and the boilermakers are as thoughtfully paired as they are delicious. 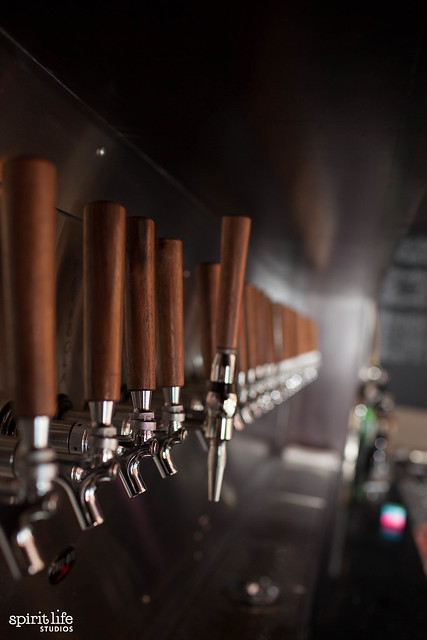 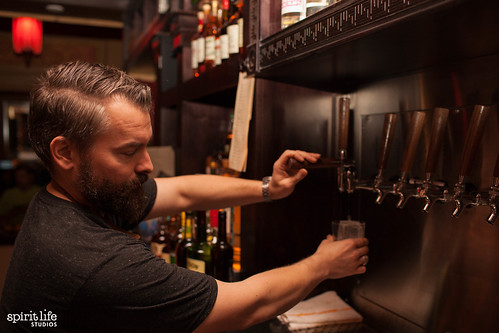 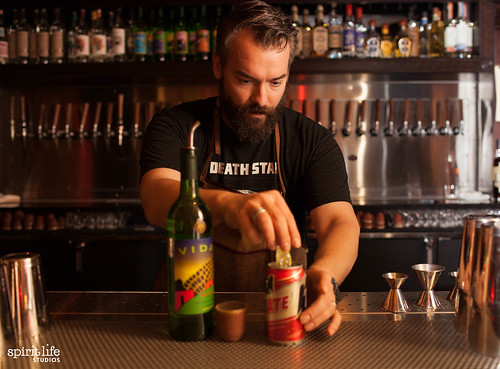